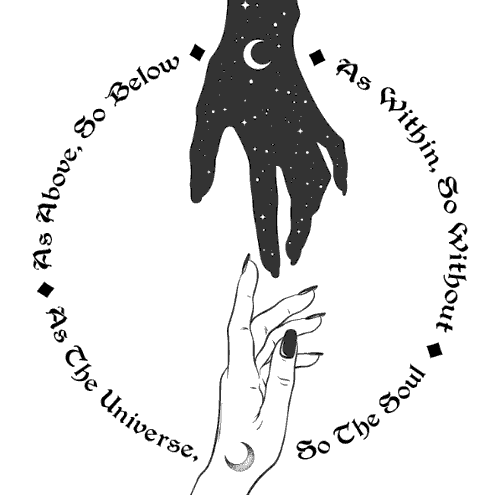 The verse, ‘As Above, So Below’ (also known as the Principle of Correspondence) , is one of the 7 Hermetic principles as described in the book – The Kybalion.

The true origin of this verse is unknown but it has largely been attributed to the legendary Egyptian sage – Hermes Trismegistus. Similarly, the verse itself is only a paraphrase and there are many variations of it. For instance, an original Arabic to English translation of the verse (as it appears in the Emerald Tablet) reads as follows:

Verses similar in meaning have also appeared in many other texts and cultures across the world. For instance, the Sanskrit verse – ‘Yatha Brahmaande, Tahta Pindaade’, which translates to ‘As the Whole, So the Parts‘ or ‘As the Macrocosm, so the Microcosm‘.

But irrespective of its origin, there’s no doubt that this verse carries within it many profound secrets of life. As the author of, ‘The Kybalion’ puts it, “There are planes beyond our knowing, but when we apply the Principle of Correspondence to them we are able to understand much that would otherwise be unknowable to us.”

In this article, let’s take a look at the spiritual meaning behind this verse and also look at various quotes that make use of this verse to offer valuable life lessons.

What does, ‘As Above, So Below’ mean?

One of the most common interpretations of this verse is that everything in the universe is intricately connected and that the same laws and phenomena are applicable to all planes of existence.

Now that we have analyzed this verse a little, let’s take a look at various quotes from gurus and famous authors that use this verse to offer valuable life lessons.

24 As Above, So Below quotes

We are made of stardust and we are a microcosm of the macrocosm. As above, so below. The answers to everything lie within ourselves. Look inwards, not outwards. YOU are the answer to your questions if you did but know it.” – Mike Hockney, The God Factory

“Closely related to as above, so below is as inside, so outside. This asserts that the outer world is a reflection of what is inside our minds. The world merely externalizes the inner traits of humanity. The institutions we create that shape our world are in turn shaped by the contents of our minds.” ― Michael Faust, Abraxas: Beyond Good And Evil

“Synchronicity teaches us that every event on the spiritual plane is accompanied by an event on the physical plane. As above, so below. These are translational events because what we experience is but our mind’s best attempt to translate higher dimensional spiritual concepts into the lower dimensional reality here on Earth.” ― Alan Abbadessa, The Sync Book: Myths, Magic, Media, and Mindscapes

As above, so below, is a universal law and principle. Just as we have physical DNA that make up our physical genetics and disposition, so too, do we have soul “DNA” that make us who we are spiritually and non-physically.” ― Jeff Ayan, Twin Flames: Finding Your Ultimate Lover

If the law of ‘as above, so below’ holds true, then we too are composers. We too sing songs that breathe shape into reality. But are we listening? Are we paying attention to the compositions we create?” ― Dielle Ciesco, The Unknown Mother: A Magical Walk with the Goddess of Sound

As below, so above; and as above so below. With this knowledge alone you may work miracles. – Rhonda Byrne, The Magic

Enlightenment needs embodiment. Wide-open insight needs deep-rooted instinct. As above, so below. ― Kris Franken, The Call of Intuition

As above in consciousness, so below in matter – Michael Sharp, The Book of Light

Every moment is a crossroad in time. Consider that, as above so below and as inside so outside and live accordingly. ― Grigoris Deoudis

The degree of freedom we enjoy outwardly is a reflection of the degree of love we cultivate inwardly. ― Eric Micha’el Leventhal

There’s always as much below ground as above. That’s the trouble with people, their root problem. Life runs alongside them, unseen.” ― Richard Powers, The Overstory

Consciousness comes first while physical realms and beings are manifestations or projections of that primordial consciousness — as above, so below, as many ancient wisdom traditions state.” ― Graham Hancock, The Divine Spark

As above, so below. Our world is the seeable, touchable, hearable, smellable, and tastable form of all the hidden spiritual worlds. There is nothing in our physical world that does not come from the worlds above. Everything we see in this world is only a reflection, an approximation, a clue, to something beyond outward appearances.” ― Rav Berg, Kabbalistic Astrology

For ours is the religion of zero and infinity, the two numbers that define the soul and the whole of existence. As above, so below.” ― Mike Hockney, The God Equation

It’s your thoughts, words, and deeds; a farmer sowing his seeds, it’s a mind thing described in those creeds. As within, so without. As above, so below. Think, say and act love and it’s love that will flow. Let hate harbor in your mind and hate is what you’ll regretfully find.” ― Jose R. Coronado, The Land Flowing With Milk And Honey

“The hermetic philosophy of the harmony between man and nature contained in the phrase “As above, so below.” ― Christiane Northrup, Goddesses Never Age

There can be no outer change until there is first an inner change. As within, so without. Everything we do, unaccompanied by a change of consciousness, is but futile readjustment of surfaces. However we toil or struggle, we can receive no more than our subconscious assumptions affirm.” ― Neville Goddard, Awakened Imagination and The Search

Every change you have ever desired in your life has its inception from within. As within; so without. Beautify your inner universe and see the reflection of this abundance in your life experiences. ― Sanchita Pandey, Lessons from My Garden

There are universal laws at work, even here. The Law of Attraction; the Law of Correspondence; and the Law of Karma. That is: like attracts like; as within, so without; and what goes around comes around. ― H.M. Forester, Game of Aeons

The painter is in the picture. ― Bert McCoy

The whole is composed of the parts; the parts comprise the whole. – Anonymous

There is nothing new about this. “As within, so without,” meaning according to the image impressed on the subconscious mind, so is it on the objective screen of your life. ― Joseph Murphy, Believe In Yourself

The verse, As Above, So Below is very powerful because the more you think about it, the more insight it offers. If you ever find the time, make sure to meditate on this quote and use it to expand your worldview.

Earth and sky, woods and fields, lakes and rivers, the mountain and the sea, are excellent schoolmasters, and teach some END_OF_DOCUMENT_TOKEN_TO_BE_REPLACED

16 Inspirational Carl Sandburg Quotes On Life, Happiness and Self Awareness

Carl Sandburg was a prominent American poet, writer and journalist. He was also a great thinker and had some really END_OF_DOCUMENT_TOKEN_TO_BE_REPLACED

18 Deep Insights You Can Glean From H.W. LongFellow’s Quotes

H.W. Longfellow was a 19th century American poet and educator whose works include “Paul Revere’s Ride”, The Song of Hiawatha, END_OF_DOCUMENT_TOKEN_TO_BE_REPLACED

Neuroscientist, Dr. Joe Dispenza, has an amazingly inspirational story especially for those of us who believe in the power of END_OF_DOCUMENT_TOKEN_TO_BE_REPLACED

We all know that life has got its ups and downs, but it can be hard to believe things are END_OF_DOCUMENT_TOKEN_TO_BE_REPLACED
More inspiration

39 Quotes On The Power Of Spending Time Alone in Solitude

36 Butterfly Quotes That Will Inspire and Motivate You

48 Inspirational Quotes To Live By