The cowrie shell is thought to be one of the world’s oldest currencies. In Ancient Africa, they were traded for goods just like the dollar is today, and their use quickly spread to other civilizations. However, these small sea shells have a much deeper meaning. Read on to find out about the spiritual significance of these shells and how you can use them in your own life. 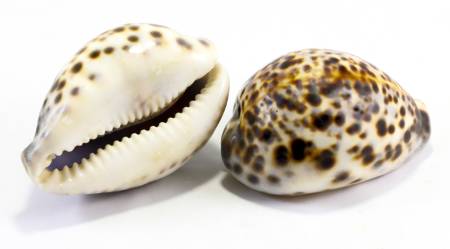 According to African legends, cowrie shells represent the protective power of the Ocean Goddess Yemaya. They were fashioned into jewelry by women all over Western Africa as a symbol of fertility, womanhood, and successful births.

Royals from African and American cultures also wore rows of these shells to signify wealth, prosperity, and protection. According to the ancient Hausa proverb: “Whoever is patient with a cowrie shell will one day have thousands of them.”

The following are 7 things that Cowrie shells symbolize from a spiritual perspective.

If you are drawn to a cowrie shell, it is said that you carry the strength of the ocean within you. This stems from the ancient legend of Yemaya (the Ocean Goddess). Affectionately known as the ‘Mommy of Water’, Yemaya is seen as a powerful Goddess that can connect to and influence all humans on earth, as well as other deities. When people pleased her, she made the ocean wash out cowrie shells onto the beach.

These shells were greatly sought after because they were seen as a token of recognition by the Goddess. Yemaya’s praise was so highly valued that cowrie shells began to be traded like money across the Continent.

Cowrie shells are revered by numerous African tribes as a powerful symbol of fertility. The split in the shell is said to represent a woman’s vulva and was often referred to as the ‘Giver or Elixir of life’. When worn around the hips, cowrie shells are said to aid fertility.

People adorned with sacred cowrie shells are said to be blessed and protected by the Ocean Goddess Yemaya. Warriors were known to glue cowrie shells onto their uniforms to protect them in battle. They were also commonly added to baskets and other household items to secure a successful harvest and abundance within the home.

Because of their widespread use as protective charms, historians suspect that cowrie shells were smuggled into America to resist the slave trade.

As a gift from the Goddess, cowrie shells have long been a symbol of prosperity, material wealth, and good fortune. In African and American cultures, people with more cowrie shells were considered to be of a higher social status and were treated with honor.

If someone gifts you a cowrie shell, they are offering you prosperity and providing you with an opportunity to improve yourself.

Cowrie shells symbolize the power of destiny throughout Africa and America. They are said to be able to transfer magical power and good luck to whoever they are aimed at.

In Ancient Rome, cowrie shells were seen as symbols of Venus, the Goddess of Love. So, they were frequently gifted to brides on their wedding day to promote fertility and a happy marriage. Even today, some African women still wear cowrie necklaces with the slit facing outwards, to signify their readiness for a relationship.

When working with love spells, press a cowrie shell into your candle with the slit pointing outwards to increase the spell’s power.

Cowrie shells are believed to be a direct form of communication between us and the Ocean Goddess Yemaya. This makes them fantastic aids for spell work and intention setting, especially when it comes to creative projects or new ventures.

Later in this article, we will look at a simple manifestation ritual using cowrie shells.

Cowrie shells come in a unique range of colors, all with their own distinct symbolism. The main ones are below:

These are the most popular cowrie shells. They are often used for astrological or divination purposes as they are believed to hold divine powers.

As the name suggests, tiger cowrie shells have a distinct tiger-like pattern on their surface. They are used to repel negative energies and ward off the evil eye.

These shells have a strong connection to prosperity and wealth.

In addition to African cultures, cowrie shells have been used by various civilizations and religions around the world. Below are some of their more common historical uses and symbolism:

Cowrie shells were often used by astrologers in Southern India to predict the future. They would accomplish this by rubbing cowrie shells together whilst reciting a ritualistic chant. A set number of shells were then separated and the remaining shells were used to predict a person’s future.

Cowrie shells are also highly regarded in Hinduism. In Hindu mythology, cowrie shells were said to be sacred to the Goddess Lakshmi and Lord Shiva. By holding cowrie shells during prayer, Hindus believe that they receive blessings from both of these deities to gain wealth, success, and fame in life.

In Ancient China, cowrie shells were used as a popular form of currency. So much so, that demand outweighed availability and people began making imitation cowrie shells out of bones and other similar materials. Cowrie shells were also placed in tombs as they were believed to provide the dead with wealth in the afterlife. Due to their strong connection to fertility, Chinese women would wear cowrie shells on their clothing to make them look more attractive to potential suitors.

Cowrie shells were highly prized in Ancient Egypt because they were thought to protect women and children from the evil eye, which was often blamed for miscarriages and deaths. Egyptian women also wore them as girdles to maintain their fertility and ensure a healthy pregnancy.

1. Keep Yellow Cowrie shells in your cash boxes or lockers to attract wealth

Yellow cowrie shells are strongly linked to Jupiter; a planet associated with monetary wealth. By keeping a yellow cowrie shell in your cash box, you can protect your finances, attract wealth and control your spending on unnecessary expenditures.

If you are looking to start a new business venture, wrap 11 energized yellow cowrie shells in a yellow cloth and store them in your money locker, or similar area of financial significance, to aid success.

2. Carry a Tiger Cowrie with you while traveling for protection

Tiger cowrie shells bear a striking resemblance to tiger skin which is believed to be ruled by the powerful Hindu Goddess Maa Kali. As a result, these shells are thought to provide protection against black magic, as well as physical and spiritual harm. Keep a tiger cowrie shell in your car to aid a safe journey and protect you while travelling.

3. Use white Cowrie shells for divination

Cowrie shell divination is popular in West African cultures. It has also been performed in India, East Africa, and various Afro-American cultures. This style of divination comes in a variety of forms, ranging from 8 to 21 shells.

Hold the shells in the palm of your hand whilst reciting your question then toss your shells onto a suitable mat or cloth. Your answer can be determined by the number of shells that land with the slit facing upwards (indicating ‘yes’). White cowrie shells are the most popular shell used in divination because of their strong divinatory powers.

In Hinduism, a cowrie shell mala with 36+1 beads is widely used as a rosary (or Japa Mala) to enhance focus when chanting mantras of the Supreme Mother Goddess Mahalaxmi.

Tiger cowrie shells are great for aiding any meditation practice as they form a protective shield around your aura. White cowrie shells are particularly beneficial for women as they help you to connect with your divine inner feminine. Whereas, yellow cowrie shells are excellent for retaining concentration when chanting mantras.

6. Use white Cowrie shells in manifestation rituals and during prayer

White cowrie shells have the power to help you manifest faster.

Write your goal on a small piece of paper and insert it into the slit of a cowrie shell. You can also insert a small object that signifies your intent, such as a crystal. Then leave it out on a windowsill overnight so it can soak up the energy of the moon. You can continue to leave your cowrie shell in a prominent place until your wish materializes. With cowrie shells, you must trust your intuition and listen out for any hidden messages from the Goddess herself.

You can also hold the shells in your right or left hand during prayer to increase the power of your prayer.

7. Carry 3 yellow cowrie shells in your wallet to attract wealth

Carry one or three yellow cowrie shells in your wallet to attract wealth and good luck. This also helps repel negativity & psychic attacks. You can also place cowrie in odd numbers in a bowl in different corners of your house or in your altar to attract wealth.

Cowrie shells may no longer be used as currency but they still play a significant role in cultures around the world. The rich history of cowrie shells has seen them admired, not just for their beauty, but also for their divine symbolism of prosperity, honor, and womanhood. If you ever feel like you need a pick-me-up, simply wear a cowrie shell to remind you of your own divinity and encourage you to chase your dreams.

Rosemary is an evergreen plant that is commonly used in a wide range of culinary dishes. However, it also has END_OF_DOCUMENT_TOKEN_TO_BE_REPLACED

Cinnamon is known for its intense scent and sweet flavor. However, aside from its culinary benefits, cinnamon is commonly used END_OF_DOCUMENT_TOKEN_TO_BE_REPLACED

You’ve heard of wind chimes, and you’ve certainly seen them as a commonplace decoration in almost every garden in the END_OF_DOCUMENT_TOKEN_TO_BE_REPLACED

Incense burning originated long before humans ever invented incense sticks or cones. In fact, the original incense came in the END_OF_DOCUMENT_TOKEN_TO_BE_REPLACED