Neuroscientist, Dr. Joe Dispenza, has an amazingly inspirational story especially for those of us who believe in the power of self healing.

Joe miraculously healed himself of a broken vertebrae using solely the power of his mind. Joe fully restored his body in less than 10 weeks and was able to walk and function normally.

After the recovery, Joe set out to do further research in the field of neurosciences, memory formation and cellular biology and decided to dedicate his life to help others understand and use the power of their minds to bring miraculous transformations in their lives.

Joe is New York Times best selling author and has also been a featured expert in films ‘What the bleep do we know’, ‘Down the rabbit hole’, ‘the people versus the state of illusion’ and the ‘heal documentary’.

Joe is also the author of three books, ‘How to lose your mind and create a new one‘, Being supernatural and ‘You are the placebo’.

Here is a collection of over 59 quotes by Joe Dispenza on various aspects of the mind and reality and how you can use this knowledge to transform your life:

Please note that some of these quotes are paraphrased to shorten the quote, but they retain the same meaning.

“Meditating is a means for you to move beyond your analytical mind so that you can access your subconscious mind. That’s crucial, since the subconscious is where all your bad habits and behaviors that you want to change reside.”

Quotes on Beliefs and Mind conditioning

“We’ve in fact conditioned ourselves to believe all sorts of things that aren’t necessarily true — and many of these things are having a negative impact on our health and happiness.”

“If we have very strong beliefs about something, evidence to the contrary could be sitting right in front of us, but we may not see it because what we perceive is entirely different.”

“We cannot create a new future, by holding on to the emotions of the past.”

“Learning is forming new connections in the brain and memory is maintaining/sustaining those connections.”

“If you become aware of your automatic habits and you are conscious of your unconscious behaviors so you can not go unconscious again, then you are changing.”

“The hormones of stress, in the long term, push the genetic buttons that create disease.”

“When we live by the hormones of stress and all of the energy goes to these hormonal centers and away from the heart, the heart gets starved of energy.”

“The hormones of stress make us feel separate from possibility (of learning, creation and trust).”

“If the hormones of stress are like a narcotic and we could turn on the stress response just by thought alone, then we could get addicted to our thoughts.”

Quotes on the power of thoughts

“You can change your brain just by thinking differently.”

“Knowledge is power, but knowledge about yourself is self empowerment.”

“The privilege of being a human being is that we can make a thought seem more real than anything else.”

“When we put all our attention on an idea or concept, there is a physical change that happens in the brain. The brain takes the holographic image that we are holding in our frontal lobe and creates a pattern of connections that associate with that concept/idea.”

Quotes on the power of the frontal lobe

“The size of the frontal lobe in reference to the other parts of the brain is what separates us from other animals. For human beings, the frontal lobe is almost 40% of the entire brain. For apes and chimpanzees, it is about 15% to 17%. For dogs it’s 7% and cats 3.5%.”

“Most people are so distracted by their external world that they don’t use their frontal lobe properly.”

“The moment we accept that the internal world has an effect on the external world, we have to begin to use the frontal lobe.”

“The frontal lobe gives us permission to hold on to a concept, idea, vision, dream, independent of the circumstances that exist in our world, in our body and time.”

“Frontal lobe gives us the privilege to make thought more real than anything.”

“The frontal lobe has connections to all other parts of the brain and when you ask open ended questions like what would it be like? How would it have to be?, the frontal lobe like a great symphony leader, looks out at the landscape of the entire brain and begins to select different networks of neurons and seamlessly pieces them together to create a new mind.”

Quotes on law of attraction

“The quantum field responds not to what we want; it responds to who we are being.” 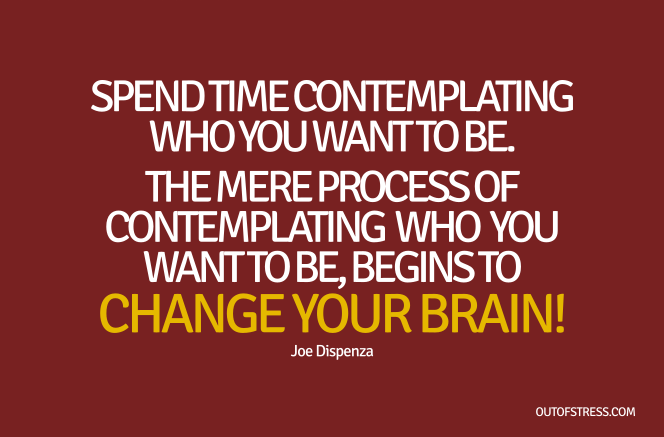 “When you marry a clear intention (intention being a thoughtful process), with an elevated emotion (which is a heartfelt process), you move into a new state of being.”

“Remind yourself every single day of who you want to be and you will cause your brain to fire in new sequences, in new patterns, in new combinations. And whenever you make your brain work differently, you are changing your mind.”

Quotes on creating a new reality

“We perceive reality based on how our brain is wired.”

“Process of change requires you becoming conscious of your unconscious self.”

“The process of change requires unlearning. It requires breaking the habit of the old self and reinventing a new self.”

“The hardest part about change is not making the same choices you made the day before.”

“The best way to predict your future is to create it not from the known, but from the unknown. When you get uncomfortable in the place of the unknown – that’s where the magic happens.”

“I found that there were 4 things that were common among every person who had a spontaneous remission,

1. The first thing was that every person accepted and believed, that there was a divine intelligence running the body.

2. The second thing is that they understood that their thoughts, actually contributed to their disease.

3. The third thing was that they decided that in order to break their thinking process, they had to reinvent themselves by thinking who they wanted to become. And as they started to think of the possibilities, their brain began to change.

4. The fourth thing was that they spent long moments with themselves (thinking about what they wanted to become). They were so involved in what they were thinking about, that they lost track of time and space.”

“If you think about it, there is some intelligence that is giving us life that is keeping our heart beating. It’s the same intelligence that is digesting our food, breaking down food into nutrients and taking that food and organizing it to repair the body. All of that is taking place without us being conscious of it.”

16 Inspirational Carl Sandburg Quotes On Life, Happiness and Self Awareness

Carl Sandburg was a prominent American poet, writer and journalist. He was also a great thinker and had some really END_OF_DOCUMENT_TOKEN_TO_BE_REPLACED

101 Inspirational Quotes On Being Yourself

If you are feeling a deep sense of meaninglessness or hollowness in your life, then one of the main reasons END_OF_DOCUMENT_TOKEN_TO_BE_REPLACED

Confucius was an ancient Chinese philosopher whose name is synonymous with Chinese culture. Also known as Confucianism, his philosophy is END_OF_DOCUMENT_TOKEN_TO_BE_REPLACED

Marcelo Matarazzo I teach several yoga classes and in most of my classes, I end the class with the salutation, END_OF_DOCUMENT_TOKEN_TO_BE_REPLACED
More inspiration

4 Secrets To Manifest Whatever You Want in Your Life

8 Ways to Make Yourself Happy In a Relationship