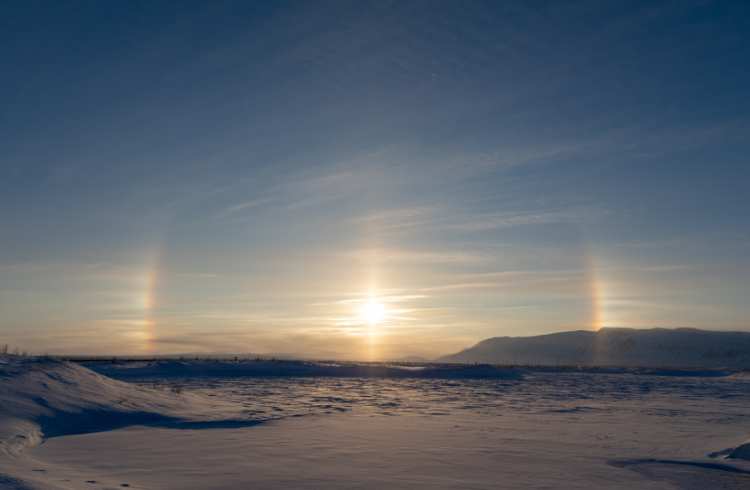 You’ve probably seen a sundog before. These beautiful phenomena can occur in any part of the world, and they’re almost guaranteed to make you look twice. Sundogs are bright spots of light around the sun, manifesting in a variety of colors and forms. They are widely recognized as a good omen, and hold great spiritual meaning for anyone who witnesses them.

What is a Sundog?

Though sundogs are quite spiritual, their roots lie in science. They are a natural occurrence that takes place because of the way light refracts through ice crystals suspended in the air. A sundog is known as a parhelion in meteorology, and it is one of many types of ice-crystal halos which form around the sun. 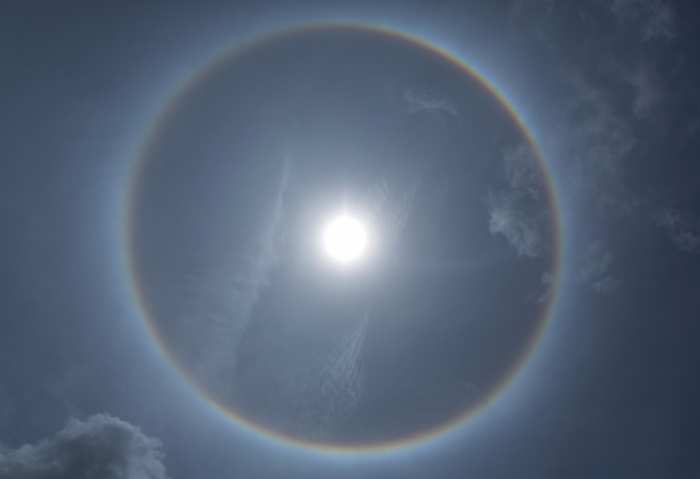 Visibility, weather, and time of day may affect how a sundog presents. It could appear faintly as a simple circular halo around the sun (as seen in the picture above), or more strongly with two points of light shining on either side of our star (as shown below). These points of light generally hang at 22 degrees to either side of the sun, mimicking the appearance of three bright celestial bodies instead of just one. 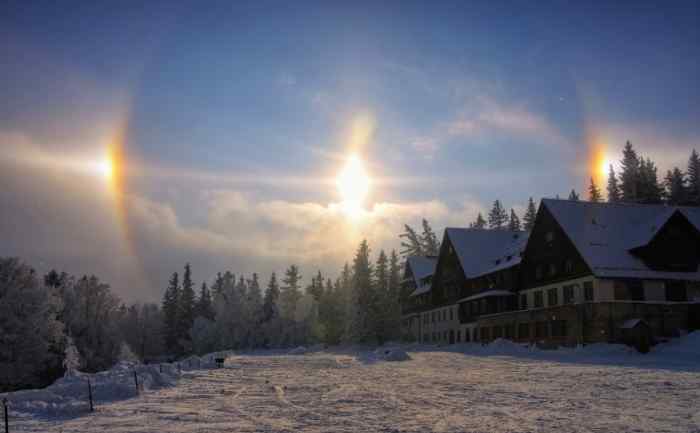 In fact, that’s how the sundog got its name. The Greeks believed the sun was Zeus, and the two points of light were said to be his loyal dogs walking alongside him through the sky.

A sundog may be white, red, blue, or a rainbow of different hues. But despite its ability to show multiple colors, a sundog should not be mistaken for a rainbow. While a rainbow is caused by light reflecting off water droplets, a sundog requires ice crystals. That’s why you’ll always see a rainbow after rain, but a sundog usually appears on crisp days with high clouds. It sometimes indicates rain or snow is on the way, but it rarely occurs directly after a storm.

What is the Spiritual Meaning of a Halo Around the Sun?

A halo around the sun can mean many different things depending on who you ask. They should always be taken as a sign from the universe or higher power. For the most part, sundogs and rainbows around the sun are good omens.

Sundogs signify a shift in your life, and multicolored halos bring news of unification and harmony. Let’s look at the various spiritual meanings associated with the sundog.

A sundog is a harbinger of positive change and transformation. This meaning can perhaps be attributed to some of the sundog’s more scientific characteristics. Because they require refraction from ice crystals, the sundog will usually appear before a rain or snow.

This physical change in the weather can mirror a psychological change within you, or a transformation in your mood or life circumstances. Just as rain can cause a barren field to yield a crop, a sundog might bring new opportunities or spiritual bounty to your life.

Positive changes do not happen passively. It takes willful energy to initiate a change or transformation, and the sundog is your signal to get the ball rolling. If you have a distant goal, catching sight of a sundog can help you put actionable steps in place to achieve it.

The ring around the sun can also represent the necessity of repetition to achieve your goals—if at first you don’t succeed, try again. Trust in the cycle of your efforts, and your labor will come to fruition.

A sundog means good luck is coming your way. While the rainbow is a sort of light at the end of the tunnel, you’re more likely to encounter a sundog at the beginning of this metaphorical tunnel. However, don’t be discouraged. Rather than a sign of hard times ahead, a sundog indicates you will get through these hard times. At the end of them, good luck and good fortune will surely come your way.


The sundog presents often as a simple circle, which is a sign of balance. The circle is a perfect geometric shape, its undeniable symmetry truly a sight for sore eyes among the many inconsistencies of earthly form and function. The sundog’s shape exemplifies its character, and reflects the perfectly-balanced cycles of life, death, and rebirth that create harmony in the universe.

Seeing a sundog may be a sign that you yourself are living a balanced life, or that you are on the right path to finding the stability you need.

Long before the formal study of meteorology, ancient native American tribes sensed that a rainbow around the sun meant the coming of rain. Rain in itself is a sign of abundance and prosperity, as it sustains growing crops and brings life to barren fields. As a signal of impending rain, the sundog mirrors these characteristics. It is an omen of new growth, prosperity, and bounty in all aspects of your life.

A halo represents the heavens, so it makes sense that a halo around the sun can be a sign of divine intervention. This intervention is positive, and usually comes when you need it most. A sundog is especially meaningful before a big event in your life like a job change or extensive period of travel. When you embark on any sort of mission, the sundog shines through with good luck and divine protection on your journey.

Even in your darkest moments, the universe will protect you. Be on the lookout for a sundog when times are tough. This could be when you’re in a financial bind, when you or a family member is sick, or even when you are grieving. It also may appear as you are going through a trial at work or in your relationship. Either way, let it bring hope to your life. The sundog means your future is bright and that troubles will pass.

8. Unity & Togetherness of All Things

Native American tribes like the Navajo and Hopi ascribe a special meaning to rainbows appearing around the sun. Each color in the rainbow represents different people of the world. When they come together around the sun, it indicates a unification of different nations and is a sign of impending harmony on earth. This is both a time of change and a time of unity, signifying the beginning of a new period of peacefulness for all creatures and people on the planet.

A sundog is a sign from a higher power. No matter which higher power you believe in, the sundog showcases its strength and presence in the world. It serves as a way to connect you to your own spirituality and strengthen your bond with the divine. It can help bring you to a higher plane of understanding and aid you on the path to spiritual enlightenment or ascension.

Prophecies Associated with the Sundog 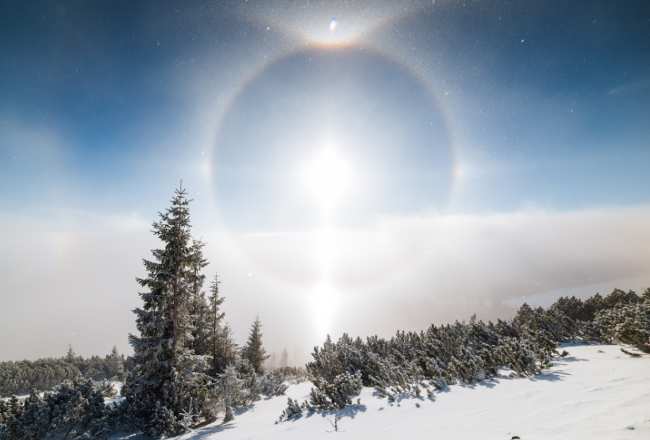 It is particularly vital to note the Whirling Rainbow prophecy associated with the multicolored sundog. Laid out by the Navajo people of North America, the Rainbow Prophecy foretells a shift in the nature of interconnected humanity. Like most things sundog, it is indicative of change—but instead of a change in the weather or your relationship status, the Whirling Rainbow Prophecy means a shift in the world and life as we know it. Verbatim and in part, the prophecy is translated as follows:

“There will come a day when people of all races, colors, and creeds will put aside their differences. They will come together in love, joining hands in unification, to heal the Earth and all Her children. They will move over the Earth like a great Whirling Rainbow, bringing peace, understanding and healing everywhere they go. Many creatures thought to be extinct or mythical will resurface at this time; the great trees that perished will return almost overnight. All living things will flourish, drawing sustenance from the breast of our Mother, the Earth.” (Source)

Each color in the multicolored sundog represents a different race and creed in the prophecy, and their appearance in the sky together indicates the prophecy’s inevitable fulfillment. This prophetic period will be the end of war and the beginning of love, learning, and a life of peace for everyone.

It will bring back the great spiritual leaders of days gone by, known as the “Rainbow Warriors”. These leaders will teach people how to live in harmony and help individuals to bring out the best in themselves. That way, every single person, plant, and animal will have a significant role to play in this newfound society.

As you can see, the sundog is an omen of strength, unity, and good fortune. It is both a call to action and a sign that points to where that action will lead. Be on the lookout for these halos during a shift in your life or a time you need to connect with a higher power. They will confirm you’re on the right track and help you to remember that a better world is coming your way.

The cowrie shell is thought to be one of the world’s oldest currencies. In Ancient Africa, they were traded for END_OF_DOCUMENT_TOKEN_TO_BE_REPLACED

Walking down the tea aisle at any Whole Foods, or any other health food store, you’ll see “holy basil” teas END_OF_DOCUMENT_TOKEN_TO_BE_REPLACED

You’ve heard of wind chimes, and you’ve certainly seen them as a commonplace decoration in almost every garden in the END_OF_DOCUMENT_TOKEN_TO_BE_REPLACED

If it doesn’t feel authentic to define yourself by any organized religion anymore, you’re certainly not alone. You might still END_OF_DOCUMENT_TOKEN_TO_BE_REPLACED

Lyza is a certified yoga instructor and advanced practitioner, dedicating time and space each day for spiritual process and immersion in the mystical. She’s a professional wordsmith by day and an avid nature enthusiast by night, exploring all the spectacular spots and hidden gems of her native Ozark Mountain region. Get in touch with Lyza at her website, or follow her on Instagram to see her point...  visit author page.
More inspiration

7 Crystals To Heal A Broken Relationship