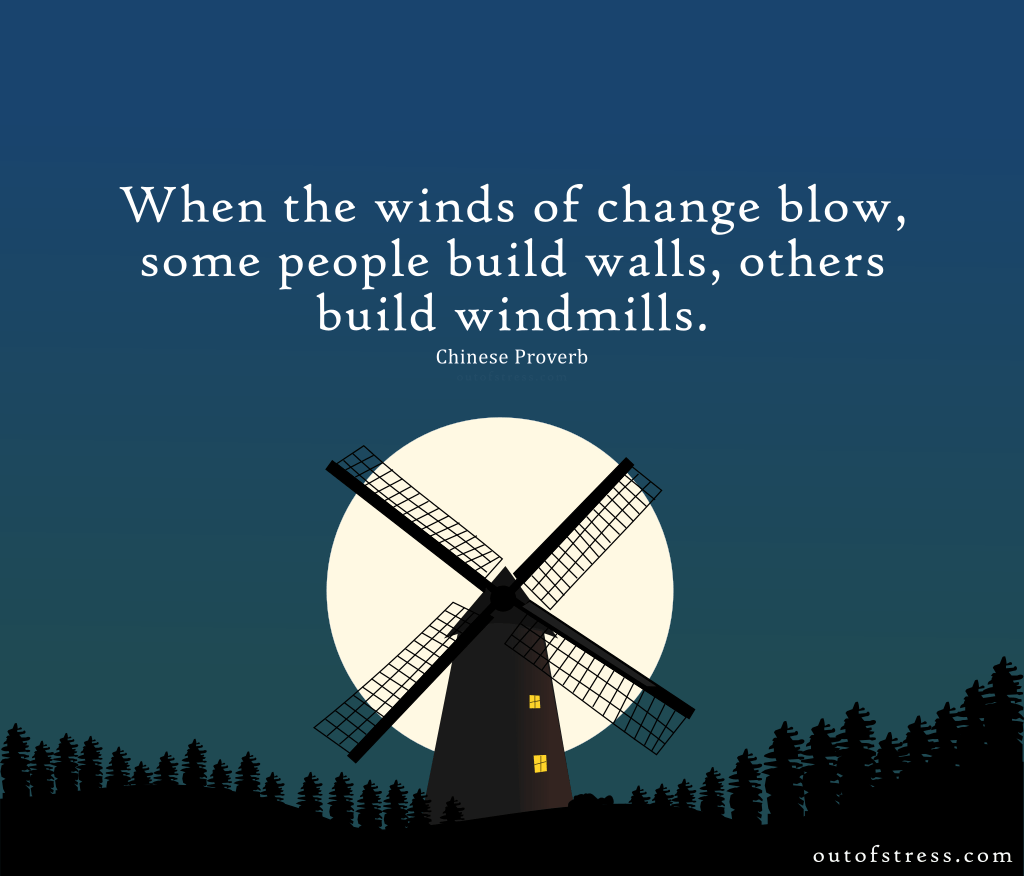 The adage of “building windmills” in the midst of the winds of change is a beautiful illustration of how you can harness the flow of life into something positive and creative by being open rather than being in resistance to it.

By being open, you get to see the hidden blessing in every situation and hence use it to your advantage. You turn into an alchemist who uses something negative to create something positive and fruitful.

But when you are in resistance (by building walls), your focus shifts toward the negative and hence you miss out on harnessing the energy of life in an efficient way.

Change is an inherent part of life’s reality

Life is a dynamic force which is continuously moving into manifestation. Everything that’s created is essentially made up of life energy, and is thus one with the nature of life force which is to be continually in a state of movement/change.

Creation is not still, it’s constantly taking new forms – forms get created, and then they get modified into something else. Energy is neither created nor destroyed, it just keeps changing forms – this is the fundamental physics of life energy.

Since change is such an inherent part of life’s movement, it’s essential that we as human beings (life’s creation) are also in tune with change, without resistance.

Your mind is always opposed to change

The mind can resist change vehemently because it finds security in the “familiar”, and is scared of the unknown/unfamiliar territory that the change proposes to bring.

Such a resistance, to the essential nature of life, is futile in the end and all it does is create human suffering in the person who is holding such a stand in his/her mind.

All spiritual teachings point towards the practice of “letting go”, which is mostly a pointer towards becoming free of resistance, thus allowing yourself to be aligned with the flow of life – this state of openness in the mind allows for solutions to flow through effortlessly and it allows you to be one with the intelligence of life which seeks to flow into the new manifestations represented by the change.

Also Read: 15 nothing lasts forever quotes that will change your perspective of life.

The intelligence required to deal with change is within you

When change happens there is also the intelligence to deal with the change. This intelligence is available within you if you are open to life, if you stop resisting what’s happening and just stay in a state of deep surrender.

The windmills are surrendered to the winds, they are not resisting the flow, rather they become one with it, and thus they generate useful/positive energy that’s life giving and life sustaining.

No matter how afraid you feel at the notion of an impending change, don’t go into a state of resistance rather just open yourself up allowing the fear to flow through you – this openness will bring forth an intelligence, a wisdom, a grace that not only allows you to deal with the change but benefit abundantly from it.

Also read: 17 inspirational starting over quotes that will give your strength.

Struggling to Make a Decision? Follow Your Inner Guidance!

36 Butterfly Quotes That Will Inspire and Motivate You

To become a butterfly, a caterpillar undergoes massive transformation, also known as – metamorphosis – a process that can sometimes END_OF_DOCUMENT_TOKEN_TO_BE_REPLACED

Life Is A Balance Between Holding On And Letting Go – Rumi

Balance is the crux of life. Everything in life is in perfect balance and harmony. The night balances the day, END_OF_DOCUMENT_TOKEN_TO_BE_REPLACED

Normal Is Whatever You Are – Leo The Lop

Normal and abnormal exist purely within our minds. In reality, there is nothing that is normal or abnormal. Everything just END_OF_DOCUMENT_TOKEN_TO_BE_REPLACED

6 Pointers to Help You Find Your Life Purpose

What You Seek Is Seeking You – Rumi