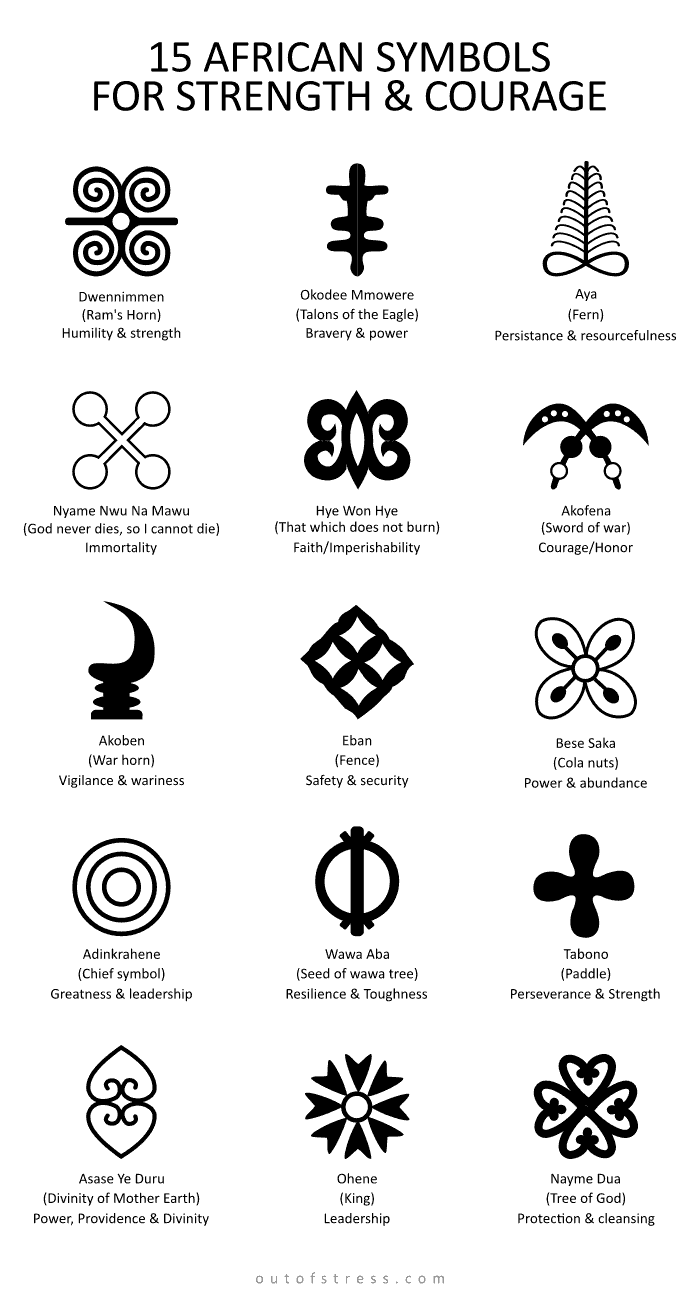 Africa has a rich history of symbols that were used to communicate important concepts, aphorisms, traditional wisdom, and life lessons throughout generations. In this article, let’s look at African symbols (particularly Adinkra symbols) associated with strength, power and courage.

If any of these symbols resonate with you, you can use them in your personal life to attract strength and positivity.

What are Adinkra symbols?

One of the most popular African symbols are the Adinkra symbols. These symbols originated in Ghana and were designed to convey powerful messages related to life, traditional practices, folk tales and age old wisdom. As these symbols were designed by the Asante ethnic group, they are also known as Asante Symbols.

There are over 120 symbols that have survived the test of time because of their unique patterns and profound meanings. Even these days Adinkra symbols are used extensively in pottery, metalwork, fabrics, interior décor, tattoo designs, jewelry, logos and commercial designs. 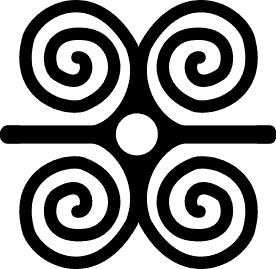 The word ‘Dwennimmen’ translates to, ‘Ram’s horns‘. This symbol depicts two Rams butting heads and represents courage, protection and standing up for what is right. 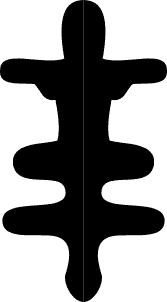 The eagle is one of the strongest birds in the sky and it uses its curved and razor-sharp claws (also known as talons) to catch and yank its prey from the ground, incapacitating it instantly. And this is the power that this symbol represents.

3. Aya (Fern) (fern is a hardy plant that can grow in difficult places.) 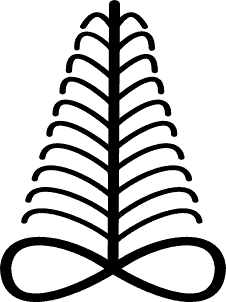 The Aya (Fern) symbol is associated with endurance and resourcefulness for the simple reason that the Aya (Fern) plant grows in difficult places like rock walls and crevices and often in tough conditions with very little water. And yet it survives.

The symbol represents strength and growth amidst adversity. It also symbolizes independence, defiance (against established norms), and perseverance. Other representations of Aya include, “I am independent of you” and “I am not afraid of you.”

When one wears the Aya symbol, they demonstrate that they have gone through many difficulties and have outlasted them all.

The symbol is a cross of what looks like two bones. Bones are known to take ages to decompose. Its longevity symbolically alludes to the fact that despite one’s physical absence, parts of them still live on.

5. Hye Won Hye (imperishability, that which does not burn)

Hye Won Hye translates to ‘that which does not burn’. This symbol originates from the age-old African ritual of fire-walking which involves walking barefoot on a bed of hot coal or stones performed by African priests. The coal is immensely hot, but the priest is able to accomplish this difficult task because of sheer faith, courage and mental strength.

This symbol represents the power of faith and how having strong faith can help you overcome difficulties in life.

As a weapon of war, the sword is a symbol of prestige to the bearer. It shows heroism to those who’ve fought in a war and won over the enemy. In the absence of war, the sword’s bearer symbolically communicates his high standing in society. 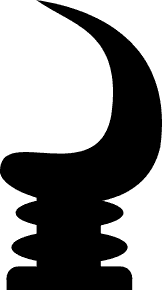 Akoben is a symbol of a horn that is blown by the Adinkra clans to alert the people of impending danger. On hearing the battle cry, they set up defenses to protect their territory against the enemy.

The war horn symbolizes vigilance. One has to be alert and prepared at all times. It shows the spirit of volunteerism and readiness to take action when called upon. Akoben was also used to represent legitimate leadership. Moreover, it was given as an award to those who demonstrated heroic acts in battle. 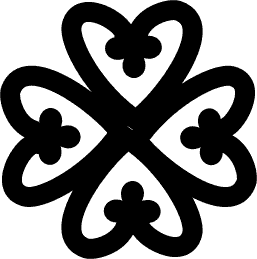 Nyame means supreme creator, and Dua stands for a tree. Hence Nyame Dua translates to – Tree of God. This symbol represents the omnipresent and all powerful nature of God. It also represents God’s protective power that is available to one and all.

Bese Saka stands for sacks of cola nuts which symbolize togetherness. It was used as a symbol of unity between different communities as they traded together. The symbol teaches people to be united and work together towards economic development.

As the major barter trade commodity among the Adinkra, Bese Saka also symbolized commerce. Furthermore, being the main cash crop in Ghana, cola nuts were highly prized and therefore, it was a symbol of affluence and power. 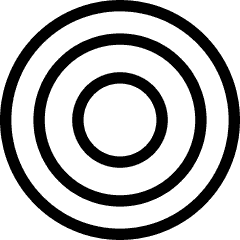 This simple yet elegant pattern comprises three concentric rings and is the symbol of leadership, charisma and strength. The symbol urges you to take responsibility, develop leadership qualities and strive toward becoming your greatest version.

By the way, Adinkrahene is considered the mother of all the other symbols. It was the inspiration for the design of all the symbols of the Adinkra clan. 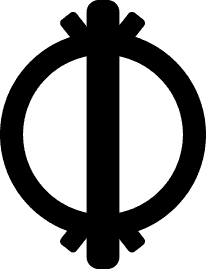 Wawa Aba is a tough seed from the Wawa tree. Because of its hardiness, the symbol stands for durability and perseverance. This symbol encourages people to push on during tough times. It’s only through perseverance that one can overcome hardship. 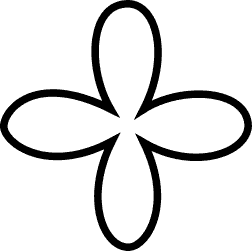 Tabono symbolizes the strength that a rower uses to row a boat across the waters. The rower has to be persistent to reach their destination. The symbol signifies that without persistence and hard work, you cannot make it. It also communicates unity of purpose among people with a common goal to reach their target.

14. Asase Ye Duru (“the earth has no weight”—is a symbol that represents power, providence and divinity) 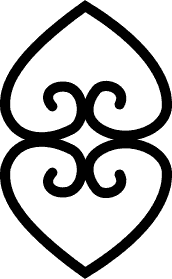 Asase Ye Duru, which roughly translates to, ‘The Earth has No Weight‘ is a symbol that represents power, providence and divinity. This is also the symbol of Mother Earth and depicts the power of mother earth in supporting human existence. Asase Ye Duru urges people to respect and conserve the environment.

Ohene symbolizes the power and wisdom of the king. The symbol shows the wisdom and strength required of a leader in governing and leading people to greatness.

So these were 15 Adinkra symbols that represent strength and courage. If you are looking for all 120 Adinkra symbols, here’s an image you can check out.

Forgiveness has a powerful effect on the human soul. It is the first step in the path of cleansing, renewal END_OF_DOCUMENT_TOKEN_TO_BE_REPLACED

The divine feminine can be defined in countless ever-shifting ways, and ancient cultures certainly knew that; that’s why we see END_OF_DOCUMENT_TOKEN_TO_BE_REPLACED

When you see a piece of jewelry containing a hand with a spiral in its palm, or when you watch END_OF_DOCUMENT_TOKEN_TO_BE_REPLACED

If you are trying to cultivate more patience into your life, then symbols can be of great use as symbols END_OF_DOCUMENT_TOKEN_TO_BE_REPLACED

Contentment is the ultimate state of being. Lying somewhere on the edge of pleasure and peace, it’s a feeling of END_OF_DOCUMENT_TOKEN_TO_BE_REPLACED
More inspiration