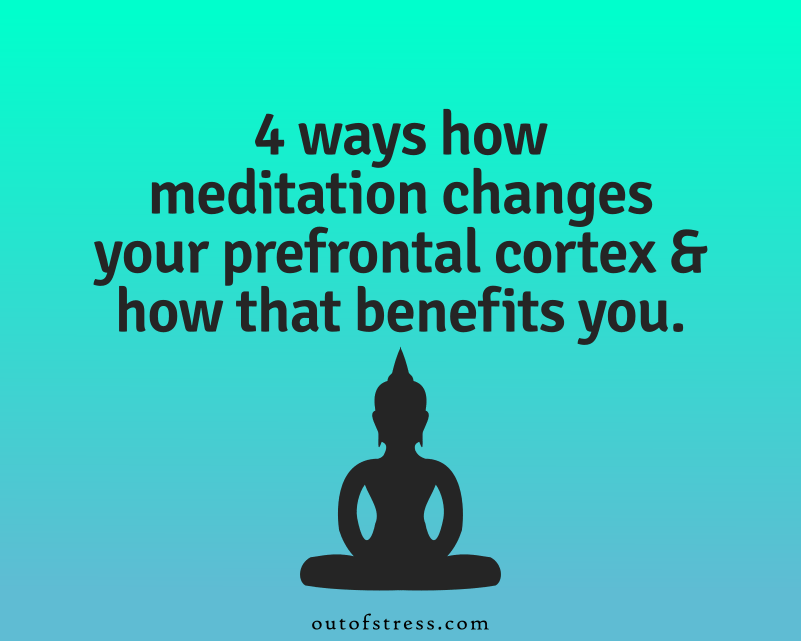 Located right behind your forehead, it helps you rationalize (make decisions), pay attention (concentrate), regulate emotions and most importantly – think consciously (self awareness). It also gives you your sense of ‘self’! It is, in essence, the “control panel” of your brain!

So how does meditation affect the prefrontal cortex? Studies show that regular meditation thickens your prefrontal cortex, prevents it from shirking with age and also improves its connection with other areas of the brain like the amygdala helping you regulate emotions better.

Let’s look into these amazing changes in more detail, but before that, here’s are two reasons why the prefrontal cortex is so important.

The relative size of the prefrontal cortex is also what separates us from the animals.

Going by these values, it won’t be wrong to conclude that the reason why animals live in auto-mode and have little to no capacity to rationalize or think consciously is because of the relatively smaller prefrontal cortex.

Perhaps this is one of the reasons why the Hindu’s adorn this area with a red dot (on the forehead), also known as the bindi. 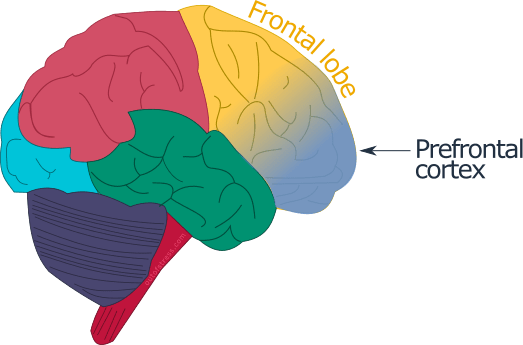 As mentioned earlier, the prefrontal cortex is literally the ‘control panel’ of your brain.

Here’s an analogy: If your brain/body was a horse, then the prefrontal cortex is the leash, upon holding which, you start to take back control over your brain (and body).

So how do you take control of the prefrontal cortex? Well, the secret lies in meditation and other contemplative practices like mindfulness. Let’s see why.

Meditation and the prefrontal cortex

Here’s are 4 ways how meditation positively impacts your prefrontal cortex.

Harvard neuroscientist Dr. Sara Lazar and colleagues studied the brains of meditators and found that their prefrontal cortexes were relatively thicker as compared to people who did not meditate.

It has also been found that meditation in particular increased gray matter density in areas of the prefrontal cortex that are responsible for planning, decision making, problem solving and emotional regulation.

So one thing is clear; meditation activates your prefrontal cortex and in the long run, thickens it, boosting brain power, making you more conscious and in control of your brain!

2. Meditation strengthens connection between the prefrontal cortex and amygdala

Without the prefrontal cortex, we will not have any control over our emotions and will act out impulsively whenever an emotion takes over – very similar to how animals act.

Studies indicate that meditation actually strengthens connections between the prefrontal cortex and amygdala and thereby giving you better control over your emotions. Studies also indicate that the actual size of the amygdala got smaller and its connections to other primal parts of the brain lowered in experienced meditators.

Not only does this give you the ability to recover faster from emotional bouts but you also become more responsive as opposed to being impulsive and reactive to emotions.

This in turn gives rise to positive qualities like patience, calmness and resilience.

It is a well established fact that the prefrontal cortex starts to shrink as we age. This is why it is harder to figure things out and remember things as we grow older.

But research by Harvard neuroscientist Dr. Sara Lazar has also found that brains of experienced mediators who were 50 years old had the same gray matter in the prefrontal cortex as 25 year olds!

4. Meditation increases activity in your left prefrontal cortex which is associated with happiness

More information on this research can be found in his book The Emotional Life of Your Brain (2012).

There are various other studies that have proven this to be true. For example, a study done on Richard Mathieu a Buddhist monk who has been practicing meditating for many years showed that Richard’s left prefrontal cortex was predominantly more active compared to his right prefrontal cortex. Subsequently, Richard was named the happiest man in world.

So these are just some known ways how meditation changes your brain and your prefrontal cortex and there is a good possibility that this is just the tip of the iceberg.

If you are new to meditation, do check out this article on meditation hacks for beginners

What is the Main Purpose of Meditation? (+ How to Achieve It)

If you have just started to meditate and are wondering what’s the point of all this, then this article is END_OF_DOCUMENT_TOKEN_TO_BE_REPLACED

How to Get into the Habit of Meditating Every Day?

Meditation has a huge number of benefits. It reduces stress, improves concentration, enhances memory, gives you a sense of wellbeing, END_OF_DOCUMENT_TOKEN_TO_BE_REPLACED

Are the Chakras Real or Imaginary?

Those diving into New Age spirituality will hear the word “chakra” quite often. However, since you can’t see your chakras END_OF_DOCUMENT_TOKEN_TO_BE_REPLACED

12 Easy Ways To Connect With Your Body

Connecting with your body can be a deeply relaxing and healing experience. So what does it mean to connect with END_OF_DOCUMENT_TOKEN_TO_BE_REPLACED

What is the Purpose of Mantras in Meditation?

Mantra is a Sanskrit word that means ‘the key to your mind’. ‘Man’ (or MUN) in Sanskrit translates to, ‘Mind’ END_OF_DOCUMENT_TOKEN_TO_BE_REPLACED

How I Overcame Anxiety by Learning to Watch My Thoughts

Stop Saying This One Word to Attract More Wealth! (by Rev. Ike)