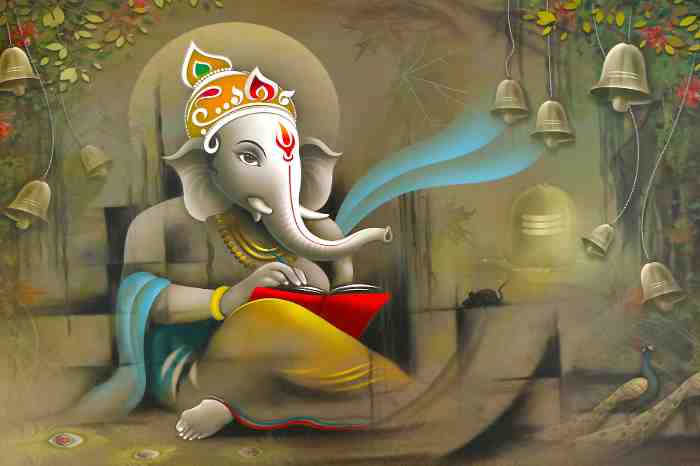 As humans, we’ve always seen the value in new beginnings. Whether it’s the bloom of spring flowers or the first day of a brand-new year, starting over brings fresh opportunities and the exciting possibility of things to come. Cultures around the world cherish the chance to begin again, and this value is often projected onto their deities.

This article is a collection of 10 prominent deities that are related to new beginnings and renewal. These deities represent the vital cycles of life and nature, serving a crucial role in ancient societies as harbingers of hope and potential.

Born of two towering titans, Eos is the ancient Greek goddess of the dawn. With rose-colored fingers stretching across the world to break up the shadows of the night, Eos ushered in the sunlight and enabled the start of daily activities. She characterizes the fresh beginning of a new day and all the potential it may hold.

You’ll see Eos in ancient art depicted as a beautiful young woman. Sometimes she walks through green meadows, sprinkling morning dew on swaying grass. Other times she flies on wide white wings clad in woven flowers. All her depictions are young and energetic, mirroring the idea of new beginnings through the symbolism of youth and action.

In Hinduism, Ganesha is a tenacious god of new beginnings who is consulted before all major undertakings. Despite his status as an ancient god, Ganesha is still worshipped today and is one of the most notable gods in the Hindu pantheon.

With the head of an elephant and a portly pot belly, Ganesha’s unmistakable depictions are both beautiful and meaningful — an elephant is usually the path-maker in the forest, clearing the way with its large body so that others might start their journeys.

Ganesha himself is also a path-maker. He is a remover of obstacles, rewarding perseverance with good fortune and success in new endeavors. Especially revered by intellectuals, Ganesha favors bankers, authors, and people working in the STEM fields. He resides on the cutting edge of discovery and invention, helping facilitate the start of new things with knowledge and wisdom.

Source – Amazon.com
Brigit is an ancient Celtic deity known to bring prosperity, health, and growth. She presides over springtime, the season of new life. Signifying the end of winter and the start of planting and harvesting, spring is known for new beginnings. Brigit also represents fertility and birth, the beginning of the new life cycle and the ultimate age of opportunity.

Brigit is a protectress of new mothers and babies, guiding them on a path of safety and security as the life cycle begins. Also known as Brigid, Brid, or Brig, her name means “exalted one” in the old Gaelic language. Some historians believe her name eventually morphed to “bride” in English, representing the beginning of married life and the dawn of a new era for the wedded woman.

Jana and Janus were two very important deities in ancient Rome. A sun god, Janus presided over realms of transformation and movement like passageways and doorways. Usually depicted with two faces, Janus had mastery over time, beginnings, endings, and all transitions. This gave him ultimate authority over new beginnings, and ancient worshippers would often pray to him before entering into battle or starting up a new enterprise. 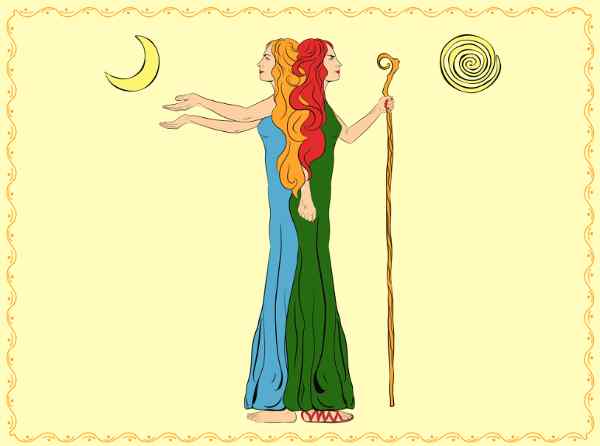 A moon goddess, Jana was Janus’ consort and watched over cycles like childbirth and the seasons. She ruled transitions, initiations, and the Wheel of the Year. The first month, January, is named after Jana—it comes from the word Janua, meaning doorway or gate. Like Janus, Jana had two faces. One looked back into the past, while the other gazed towards the future.


https://commons.wikimedia.org/wiki/File:Ostara_by_Johannes_Gehrts.jpg
Ēostre was worshipped by ancient western Germanic tribes long before Christianity swept over Europe. She represents the spring season, the morning, and the fresh start of a new day. We still use a version of her name when referring to the direction where the sun rises, in the east. Ēostre’s month of April (known as Ōstarmānod in the ancient Germanic dialect) also marked the beginning of spring and brought with it the spring equinox festival where she was specially praised and exalted.

You may hear Ēostre called Ostara or Eastre. If this sounds familiar, it’s because the Christian holiday Easter was named after her—which makes perfect sense, considering Easter is a celebration of birth. Ēostre herself also represents fertility, rebirth, and renewal after the cold winter, a perfect characterization of new beginnings in all their forms.

A celebrated deity in the Roman pantheon, Strenua was the goddess of the new year. She represented purification and well-being, her practitioners invoking her to purge out all the mistakes and negative feelings of the previous year. Strenua also ushered in the beginning of the year, characterizing the optimism and potential so intrinsic to what it means for us.

Strenua was so vital to the Roman new year celebrations that her private grove of trees became a part of the ancient new year’s festivities. On January first, twigs from Strenua’s grove were picked and carried down the Via Sacra in ancient Rome to her shrine. The twigs were placed as an offering in her honor to help ensure a prosperous year and the start of something truly wonderful.

Zorya was an ancient Slavic goddess of light known as the Morning Star. She was said to live in the palace of her father Dazbog, the sun god. She opened the gates of his castle every morning, letting his bright rays shine out over the earth. As each new day dawned, Zorya brought hope and possibility. However, her mythology gets murky and complicated as legends became lost over time.

Sometimes, Zorya is a single entity with the unique purpose of bringing about the day. Other times, she has three sister-aspects with distinct dominion over the dawn, dusk, and darkest night. While her dawn aspect is the one most closely associated with new beginnings, it can be argued that all aspects are vital to the concept. They each represent a different part of the cycle, and every element must be in place for the cycle of a day to be completed and for a new beginning to arrive.


As the most renowned goddess in the Norse pantheon, Freyja wears many hats. She represents both love and lust, characterizing the fresh start of new relationships and all the potential we feel as love is kindled. As a mother and goddess of fertility, Freyja ushers in new life and offers a new beginning in the form of a child.

Of course, Freyja serves other roles as well. One of her most vital aspects comes not in life but in death, when she handpicks the most valiant warriors who have perished on the battlefield to come sit by her side in her great hall, Sessrumnir. In this way, Freyja represents death as the beginning of a new chapter. She helps reframe the fear of oblivion as the start of a beautiful afterlife.

Source – Amazon.com
An ancient water deity of the Nigerian Yoruba people, Yemaya is a watchful mother-goddess who nurtures and protects. She has many roles within Yoruba culture and religion, and her association with fertility means that she plays a major role in new beginnings through the creation of life. Yemaya was called upon primarily to aid in fertility, conception, and childbirth, though she also served as a fierce watchwoman to growing children and new mothers.

As a water goddess, Yemaya also had dominion over rivers and oceans. She guided sailors and travelers across waters as they sought out new lives in faraway lands, helping them arrive safely on foreign shores to start afresh. Some people still worship Yemaya today, and may conveniently evoke her at any body of water for cleansing practices. When no water is available, Yemaya can help find some through witchcraft, thereby preserving precious life once it has begun and allowing it to flourish once again.

Saraswati is a significant goddess in the Hindu pantheon representing creativity, education, knowledge, and learning. Her name comes from the word saras, and is translated from Sanskrit to mean “that which is fluid”. She is strongly associated with water, a cleansing element which purifies and readies us for new beginnings.

Saraswati’s dominion over matters of intellect and creativity can be seen as preparation for the transformation that occurs once we become educated. When we obtain new knowledge, we gain a higher understanding. This marks a new beginning or turning point on life’s journey, essentially helping us turn into new people with new opportunities as we learn and grow.

The cycle of the seasons, the blossoming of new life, and a universal hope for the future all contribute to a happy, healthy world. Since new beginnings are so vital, their deities feature prominently in nearly every pantheon. Other notable divinities include the Hindu goddess Ushas, Greek Hemera, and Lithuanian Aušrinė, among many others. The next time you feel like you could use a fresh start, channel the energy of one of these gods or goddesses to get you through the day!

A French phrase for “already seen”, Deja Vu is that chilling feeling of familiarity that you can’t quite put your END_OF_DOCUMENT_TOKEN_TO_BE_REPLACED

Most of us have memories of picking seashells from a beach as kids. However, shells are much more than attractive END_OF_DOCUMENT_TOKEN_TO_BE_REPLACED

Walking down the tea aisle at any Whole Foods, or any other health food store, you’ll see “holy basil” teas END_OF_DOCUMENT_TOKEN_TO_BE_REPLACED

If it doesn’t feel authentic to define yourself by any organized religion anymore, you’re certainly not alone. You might still END_OF_DOCUMENT_TOKEN_TO_BE_REPLACED

Lyza is a certified yoga instructor and advanced practitioner, dedicating time and space each day for spiritual process and immersion in the mystical. She’s a professional wordsmith by day and an avid nature enthusiast by night, exploring all the spectacular spots and hidden gems of her native Ozark Mountain region. Get in touch with Lyza at her website, or follow her on Instagram to see her point...  visit author page.
More inspiration

11 Mantras to Say While Smudging Yourself Or Your Home

11 Poems to Heal Your Heart Chakra

10 Ways to Access Higher Guidance & Bring Your Life on Track