If you are an empath, you will know all too well that you are deeply sensitive to energy. This is a gift, but at the same time, if you are not careful, you could get impacted by energies that are both emotionally and physically draining. The good news is that there are many shielding techniques that you can use to protect yourself from these energies. One such simple yet powerful technique is to use a protection jar.

In this article, let’s look at how you can make a powerful protection jar to protect yourself from negative energies and to achieve emotional balance. But before we look at the steps to create a protection jar, let’s start by looking at the 17 best ingredients (based on availability) that you can add to your jar.

Based on availability or based on your requirement you can add herbs, crystals, sigils and symbols to your jar. Let’s begin with the herbs and then look at some crystals and sigils that you can consider adding.

Rosemary is well-known to cultures around the world for its ability to ward off evil spirits. It was often burned by Roman priests during religious ceremonies to purify a space and remove negativity. Rosemary was also traditionally tied over a bed to prevent nightmares and sickness. This herb represents ‘new beginnings’ which makes it the perfect addition to your protection jar if you are opening yourself up to new opportunities or trying to break bad habits.

Sage is the ultimate purifying and cleansing herb. Since Ancient Egyptian times, it has been burned as an incense for protection and to ward off disease. Sage is a member of the plant family Salvia, which means “to heal,” and it was widely used in Native American cultures to cleanse people of negativity. This herb is also known to be a natural purifier that can cleanse the air in your home and aid in more restful sleep.

Mint is a potent healing herb in every sense! Planting this herb in your garden is believed to protect your home from negativity whilst also attracting abundance into your life. Across the Middle East, this herb was used to remove negative energies and invite in helpful spirits, making it a common staple on witch’s altars. Its bold, refreshing scent is very effective at cleansing a space as well as a highly sensitive person who is looking for protection against negative influences!

Cinnamon is one of the most widely used herbs in spell work, and for good reason! The sweet scent of cinnamon reminds us of a comforting warm fire and the joy of Christmas, making it a wonderful herb to shield your home from negative energy. On top of this, cinnamon is believed to add an extra energy boost to any spell, so it is a must-have for your protection spell jar!

Many supernatural television shows portray salt as the ultimate weapon against evil entities, which is not far from the truth! It is believed that sprinkling salt around your home keeps negativity at bay. When combined with water, it can also be used as a cleansing herb (simply sprinkle around your room). Black ritual salt (also known as witch’s salt) is made from charred herbs and ash from the bottom of a cauldron, as well as sea salt. It is highly effective at absorbing negative energies and driving away evil spirits.

Basil has been at the center of numerous superstitions, folklore, and beliefs for over 5000 years. The name literally means ‘king’ or ‘royal’ and it was traditionally placed in the hands of the dead throughout Europe to ensure a safe passage to the afterlife. It is a powerful protective herb that is thought to appease deities and ward off evil spirits. 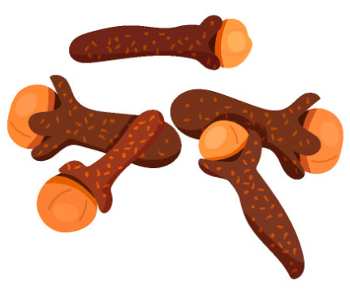 When burned as incense, whole clove seeds can drive away hostile or negative forces. They are also very effective at shielding you from psychic attacks. Adding whole clove seeds to your protection jar will help to bring mental clarity, dispel negativity, and encourage a sense of release.

Black pepper is a common staple in every person’s kitchen but did you know that it also has powerful protective properties? In many spiritual cultures, black pepper is often sprinkled around an area to protect against unwelcome visitors and can be added to charms to ward against negative influences. Peppercorns can be used to release jealous or vindictive thoughts and can be added to powders to form a powerful protective barrier around your home.

Bay leaves can melt away your worries and make your wishes come true! It is commonly used in manifestation, protection, and cleansing rituals. Bay leaf has a powerful positive energy that quickly became a symbol of victory and nobility in Roman times. As a result, this herb is strongly connected with good luck, empowerment, and financial protection.

Sweetgrass is used as a smudging tool to cleanse people’s auras, objects, and spaces. It is also commonly added to protection amulets. In native American cultures, sweetgrass is commonly braided, dried, and then burned to attract positivity and provide protection for the tribe.

Lavender is a fragrant plant known for its calming properties and ability to relieve stress. It also has powerful protective properties. When added to a protection spell jar, lavender can protect against abuse, psychic attacks, nightmares, and can attract good luck into your life.

Sunflowers are regarded as symbols of positive energy in cultures around the globe. Sunflower petals will help you see the truth in any situation and provide you with protection, vibrancy, and the empowerment to face any situation making them perfect for empaths.

Mullein is a medicinal plant that is thought to instill courage, attract love, and provide protection. To avoid nightmares, a sachet of mullein flowers is traditionally placed underneath the pillow and bathing in this herb is believed to give you the courage needed to face your enemies. With this much protective power, it is not surprising that mullein is commonly used in many protection spells to ward against negativity.

Cayenne pepper is commonly used in purification rituals to banish negativity. It is a popular ingredient in love spells as it is believed to be able to reverse negative emotions and promote warmth in relationships. As an empath, adding cayenne pepper to your protection jar will also enhance the protective powers of all your other ingredients.

Hematite is a highly effective grounding stone for empaths that will provide you with protection and emotional stability. It is a great crystal to help you find the inner peace and strength you need to heal old wounds. Add one large hematite crystal to your protection jar or you can add one or more smaller ones.

Black tourmaline is a powerfully protective stone that is known to be able to remove hexes and absorb negative energies. It also can transform anxious feelings into positive ones. By wearing black tourmaline or adding it to your protection jar, you can create a powerful shield of protection around yourself and your home.

Do you constantly feel like you are surrounded by a cloud of negativity? Then you need to add a clear quartz crystal to your protection jar! This crystal can dispel negativity and also attract positivity at the same time. Clear Quartz is known as the master healer as it helps to enhance the energy flow within your body which will help to keep you in a more positive state of mind. This is an excellent crystal for an empath.

How to make your protection jar?

Now that we have taken a look at the ingredients, let’s look at the steps to create a protection jar.

Before you begin, you will need to thoroughly wash out your chosen jar. You can then cleanse it of any negativity by smudging it with sage or another suitable herb. Make sure your jar is fully dried before adding your ingredients.

When you are ready, start adding each of your herbs and crystals to the jar one at a time, making sure that you place the heavier ingredients at the bottom. As you do this, it is important to focus deeply on your intentions for the spell and try to pour all of those feelings into each ingredient. If it helps, you can recite a few words as you add each item such as:

My family and my home will be protected from negative influences.
Or
I feel protected and empowered to take on any challenge.

Once your protection jar is full, screw the lid on tightly and seal with melted wax from a light blue (releasing negativity, healing), white (purity, protection), or black (banishing negativity) candle. If you wish, you can also draw a meaningful sigil on the lid. The most powerful sigils are those that you design yourself so it is well worth spending some time focusing on the image that best represents your intent.

Hold the jar in your hands, close your eyes, and really concentrate on your desires. Sometimes it can be helpful to imagine a bright white light surrounding you and the jar in a protective bubble. Do this for as long as you need.

Your protection jar is now ready!

Where should you keep your protection jar?

You can place your protection jar under your bed to keep negative energies at bay while you sleep. Alternatively, you can keep your jar on a windowsill in a prominent area of your home such as the living room. For maximum effect, make sure it is a place that your family spends a lot of time in.

Cleansing and charging your protection jar

To cleanse your jar of any negativity that has been absorbed, simply place it out under the light of the full moon every month.

The feeling of being protected and secure is something we all strive for. By pouring the power of your intent into a protection spell jar, you can empower yourself to feel confident and strong enough to face any challenge. You can also surround yourself with spiritual protection that will help to ward off any negative influences and allow you to live your life to the fullest.

Have you ever said to someone “sending good thoughts” when things are not going their way? This is effectively a END_OF_DOCUMENT_TOKEN_TO_BE_REPLACED

Empathy is an incredibly powerful tool. It can help you trust your intuition and open your heart to others. Yet, END_OF_DOCUMENT_TOKEN_TO_BE_REPLACED

Being an empath can be a gift and a curse. The ability to feel and become influenced by the energies END_OF_DOCUMENT_TOKEN_TO_BE_REPLACED

Marcelo Matarazzo I teach several yoga classes and in most of my classes, I end the class with the salutation, END_OF_DOCUMENT_TOKEN_TO_BE_REPLACED

Serenity Prayer To Find Peace and Courage During Tough Times

One day when I was teaching a yoga class, some construction workers were using a jack hammer outside during the END_OF_DOCUMENT_TOKEN_TO_BE_REPLACED

7 Signs of Divine Timing Working in Your Life

39 Ways for Becoming More Self Aware